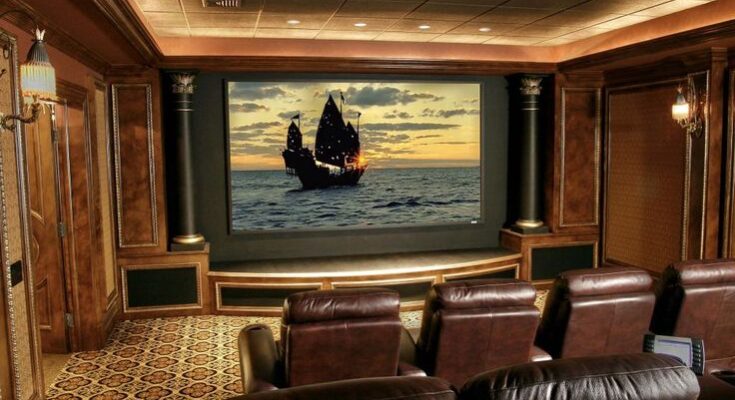 What is a home theater?

Home cinemas which are also known as home theaters or theater rooms are audio-visual systems for home entertainment. The whole idea of this is to enjoy the theater experience at home.  Since the outbreak of COVID when the theaters and cinema houses were closed, the demand for home theaters systems has increased further. Home theaters isn’t only confined to watching a movie or a serial, you can also attach your gaming station like PS4 and enjoy your gaming in way better quality than before. The interest for this multipurpose home theater gadget is expanding step by step.

Here is the complete information about how to install a home theaters.

Details of the connection:

It’s the way of connecting the different components of home theater pertaining to the networks and routes which throws the signals to the distributor from the source. Source components like cable boxes, media streamers, and blu-ray players are considered as beginning points while TV and loudspeakers are endpoints.

A complete setup consists of a TV Av receiver, A Blu-ray receiver. A media streamer and a DVD player. One subwoofer and five speakers would be enough for a 5.1 surround sound system. Here are complete connection details.

The TV monitor output of the AV receiver will be connected to one of the video inputs on TV.  HDMI connection is compatible with almost all the systems and it’s also very effective. This connection allows the viewing of video from all the video sources connected to your home theater on your TV screen. Turn on the AV receiver and choose the correct input source on the TV display.

There are two ways to do it. One of them is by connecting audio outputs of TV to AUX audio inputs on the AV receiver. The other way is by using the Audio return channel if the TV and receiver have that feature. Through both these methods you can get your sources connected to TV and enjoy the surround sound audio via your home theater system.

Connecting the video projector or TV:

Connect the antenna directly with your TV if you receive your programs via antenna. While in case of smart TV you have to connect it to the internet. Incoming cable must be attached to the box to receive programs via cable or satellite. This will provide you two connection options between your cable or satellite box and TV and the remaining home theater system. It’s better to consult an expert from a Best Home Theater Company.

The setup procedure will be different if you have a video projector rather than a TV. The projector is slightly better for a home theater as compared to TV. This is because even mini or small projectors can provide a bigger picture and a bigger screen is better for home theater.

Connecting the record players and Blu-ray Disc, DVD and CD:

This connection type is dependent on two things: one is whether your home theater device has HDMI connectivity. The other is whether the receiver can access signals for both audio and video via that HDMI connection. If that’s the case then make a connection between the output of HDMI from the player to receiver and from receiver to TV.  You might need to add a few other additional digital or analog connections between the receiver and player if your receiver only allows HDMI to pass through it. If you have a 3D Blu-ray Disc player or 3D TV then then there are few other additional connection options available.

Build up an association between video yield of the player to the DVD input on the AV recipient. Use the HDMI option if available, if not then look for other available video output options like component video.

A CD or record player can be connected to an AV receiver by using analog or digital audio inputs of the player. If you’re using a CD recorder then connect it with the Av receiver through Audio Tape-record or playback input output loop connections.

Media streamers like Ruku, Amazon Fire TV, Google Chromecast or Apple TV should be connected to the internet. Streaming content from these devices can be viewed on your TV by connecting the Streamer using HDMI in two ways.

Speaker and subwoofer connectivity and placing: